Who is this legend you speak of?

That’s what I got. “Nerd”. Which makes sense. Didn’t expect mojad to really tell us. He’s probably laughing at us for trying to figure it out (edit: called it, i was right :P). At least he’s not dead or something.

BSA, the so-called hidden message you got from Reddit (edit: before that reply was edited) kinda makes sense… because an encrypted “nerd” would naturally get memed and become that. Especially on a platform like Reddit.

“Nerd”. Which makes sense. Didn’t expect mojad to really tell us. He’s probably laughing at us for trying to figure it out. At least he’s not dead or something.

I don’t think he said it to laugh at us (he didn’t send the message to “us,” it was a public comment on yt), but probably just as a joke for whoever would try to decode it.

What a great forum member he/she was.

looking at his youtube, he replied to someone asking his gender and apparently he’s a boy

He was one of the first to reply to me too

It was in his disscussion tab 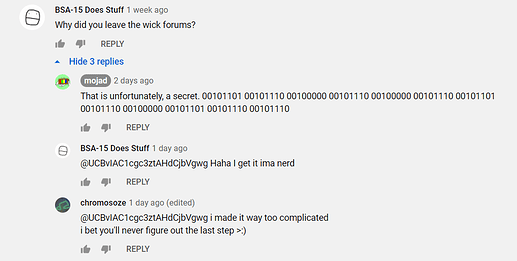 Ask @pumpkinhead on what they talked about

We may never know why mojad left the forums

@pumpkinhead what were you talking about with mojad?

I feel like this is starting to get off topic. I mean it is related to a member of the Wick Forums, but that member decided to leave… so we don’t have to start collecting information about him since it wouldn’t be much related to this thread (the question in this thread was already answered), nor would it benefit or is connected to the forums that much.

Can We Ask The moderator to close it???

this. i- i can’t believe it. you all remembered me? this, breaks me down to tears. thank you. i still am unable to join. but at least we had fun wile we can.