hi i made a small rhythm game in Wick Editor (of course)
(basically friday night funkin’ i guess but it’s infinitely your turn because there’s no other guy)
(so basically dance dance revolution but for lazy people because you don’t actually dance. so just sit sit revolution)
use wasd to hit notes or arrow keys. but i use wasd because of the way my keyboard’s arrow keys were designed. 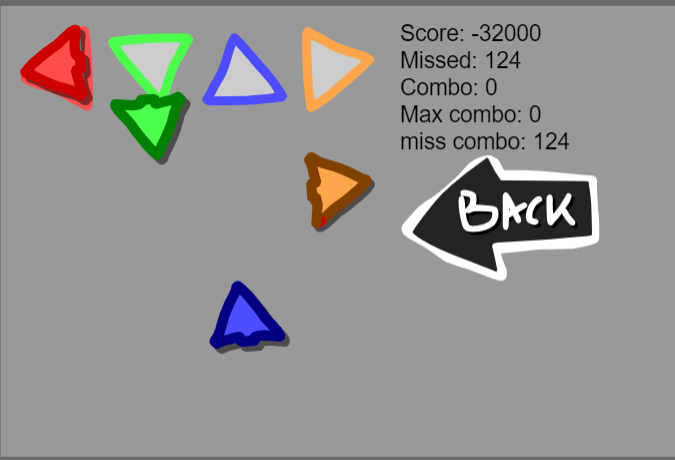 as of now there is only two songs:

with the way i programmed it, i tried making it easy to add songs by writing the data by hand. preferably i would like to have it like where i can place notes physically and it plays with the music, and it could be comparable to geometry dash’s (another rhythm(???) game)'s level editor, except with arrows instead of blocks.

also for people who want to make a rhythm game, i suggest you use time to keep track of time? i mean in jovanny’s tutorial, he makes the arrows go up by making their y values go up a fixed value every frame. but you should use Date.now() (which reports the number of milliseconds since some point of decades ago) to keep track of how far the arrow would travel since it was spawned. that way if there is any lag it doesn’t mess up the entire game.

This is the best FNF rhythm game spinoff on the forums by a long shot. The art is awesome and it’s fun and playable. You are AMAZING at coding, so keep up with the good work and keep up posted (I love seeing your creations)!

I’ve been wanting to do a horror game for a while now (I think it has great potential on wick editor), would you want to colab?

I’ve been wanting to do a horror game for a while now (I think it has great potential on wick editor), would you want to colab?

No, thanks. Also I’m already part of a current collab. But thanks for the feedback.

Added fnf arrows and bf because why not

just a tip for anyone who sucks at FNF like me, use A, S, up, and right. it’ll help a little bit giving one finger one key instead of giving the middle finger both W and S or up and down. (well that’s just how i put my fingers)

i added a length property to the new song’s data (like when you have to hold down a note). except i didn’t actually add that mechanic yet, but i will do so tommorow. and maybe another song. i might have to make a brand new one, since for the songs i just used pre-existing mp3s i had on my computer.

and since now you can actually restart, i suppose i will add an html file for when you’re on firefox where you can automatically open a downloaded file and it will get deleted after it is used. why doesn’t chrome have this?
the file was too large :( guess it’s cuz of the music. i’ll probably just put this onto somewhere like replit or maybe itchio

Rhythm Game.wick (2.1 MB)
I just aligned the text
And when you’re completely done I can compress the code for you

As always, great job. I always can learn new js things by seeing the way that you program these stuffs. My only constructive comment is to update the shape of the arrows. Since I’m not a fan of these kind of games, it was hard for me to identify their directions, since they are almost equilateral triangles.

I can compress the code for you

What software do you use for that?

My only constructive comment is to update the shape of the arrows. Since I’m not a fan of these kind of games, it was hard for me to identify their directions, since they are almost equilateral triangles.

I don’t think I actually look at the direction of the arrows, I think I just look at where the arrow is left-to-right. But I can see where you are coming from. I think if I decrease the length of the triangle base, turning it into an isosceles triangle, it will make the directions more apparent. If this doesn’t help, then I’ll just turn them into regular arrows. Or maybe I can turn them into arrowheads (by that I mean the end of the arrow)

Also, before recently I have never really played any game like this. I’m kinda surprised at how not bad at this I am. On my first try I missed around 25 notes on tetris b that I made, which I reckon to be kinda hard. But after some time of repeating it over and over again I got down to 10 notes. And one time I only missed one. And I beat all the songs in hard mode in Friday Night Funkin’. Maybe it’s because I used to play Geometry Dash. I never beat a demon though. Or most of the community-created levels.

First I minify it and then I change all the variables to a single letter. After that, I use gzip to compress the html. It’s not much, but it’s better than nothing

I think a custom song maker where you drag the notes where you want them to hit would be kind of easy for you and your level of programming skills and knowledge. You just code it so the Y value corresponds to the time that the note hits

My only constructive comment is to update the shape of the arrows.

can I use this for a game @pumpkinhead?

but what’s the game about?